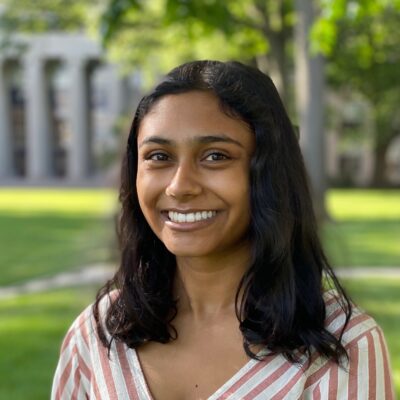 Senior Anjali Kantharuban (Computer Science and Linguistics, ’22) has been awarded the prestigious Gates Cambridge Scholarship, which fully funds graduate study at the University of Cambridge. Anjali received the email announcing her selection only an hour before an important graduate school interview and was hard-pressed to stay cool while processing the message. Only after the interview did she call her parents and let the wonderful news sink in.

Anjali, who grew up in the Bay Area and has never lived outside of the U.S., will join 22 of the most academically outstanding and socially committed young U.S. scholars and approximately 50 international peers in the U.K. this fall. In addition to being chosen for their outstanding intellectual ability, Gates Cambridge scholars also have demonstrated leadership potential and are committed to improving the lives of others.

During her upcoming year at Cambridge, Anjali will pursue her interest in natural language processing (NLP) and language revitalization by conducting research in Dr. Anna Korhonen’s Language Technology Laboratory. Dr. Korhonen is a key player in the small community of scholars working in the emerging field of natural language processing for low-resource linguistic dialects, so Anjali is honored to be pursuing her M.Phil in Theoretical and Applied Linguistics under her mentorship.

As a speaker of Sri Lankan Tamil, a non-standard dialect that is dying out, Anjali has experienced first-hand how globalized communication has intensified pressures on minority language populations to convert to standardized languages in exchange for economic reward. She notes that while natural language processing has the capacity to make information and tools more broadly accessible, the field still primarily focuses on a small set of mainstream languages. Anjali’s goal is to make natural language interfaces for computational systems equally functional for all languages, in all their variations, to prevent further loss of linguistic and cultural diversity.

Anjali’s advice to her fellow Golden Bears? “Go for it all! When applying for research opportunities or funding, try to build a story around what you want to do. It didn’t come from nowhere. Engage in self-reflection: What has led me to these questions? How did I get here?”

With the Gates Cambridge Scholarship and an M.Phil. lined up, Anjali is now in the enviable position of deciding between offers from top-notch PhD programs for the following year.

Anjali joins ten other Cal students who have received the Gates Cambridge Scholarship in the past ten years. For more information on this opportunity and other nationally competitive scholarship programs, please visit UC Berkeley’s National Scholarship Office website.