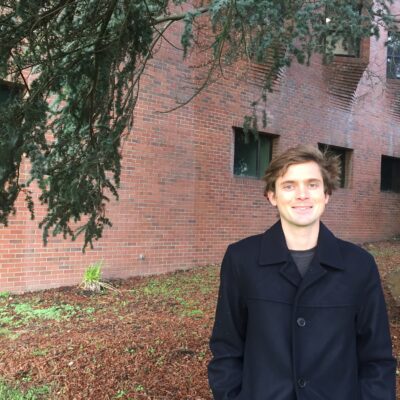 Nathaniel graduated from U.C. Berkeley in 2016 with a B.S. in Conservation and Resources Studies with Highest Distinction and Honors. Nathaniel is U.C. Berkeley’s first Marshall Scholars since 2015. The Marshall Scholarship will enable him to study at Cambridge, where he will pursue an MPhil in Geographical Research with a focus in Political Ecology.

Named for former Secretary of State George C. Marshall, the Marshall Scholarship Programme began in 1953 as a gesture of gratitude to the people of the United States for the assistance that the UK received after World War II under the Marshall Plan. The scholarships offer talented young Americans the chance to study for up to three years at a UK university of their choice. Today, the Marshall Scholarships continue to serve not only as a living gift from the UK Government to the US for the Marshall Plan, but also as a way to deepen and strengthen the transatlantic relationship through education and cultural exchange.

Nathaniel transferred to Berkeley from Wesleyan University intending to major in Chinese Studies. However, upon arriving on campus, he found that the courses that interested him the most were in Environmental Science, Policy, and Management. “I think being able to be exposed to a number of different environmental topics from a variety of perspectives, both in terms of natural sciences and social sciences, helped me to discover my interest in political ecology.”

His love of Chinese remained, and as a part of the research for his senior thesis he translated a series of classical Chinese poems by the 9th-century poet Liu Zongyuan. “A large number of his poems have never been translated to English before,” says Nathaniel, “so I was able to collaborate with Professor Paula Varsano, a Chinese poetry professor, and then also Robert Hass in the Literature Department on creating a translation.” The thesis focused on environmental and political history of South China through the lens of the Chinese nature poet Liu Zongyuan.

Nathaniel described how U.C. Berkeley supported him toward achieving his goals his goals. “I think one of the biggest forms of support that I’ve had has been relationships that I’ve developed with various mentors at UC Berkeley, some of whom were faculty advisors but some of whom weren’t. Professor Paula Varsano helped me a lot. Professor Ignacio Chapela helped to inform my research interests and my actions.”

Nathaniel first became excited about the possibility of studying in the U.K. when he discovered the Political Ecology Research Group housed at Cambridge University. Political ecology, a burgeoning discipline, encapsulated all of the topics in which Nathaniel was interested. “I originally became excited about studying in England when I discovered the professor who will be my thesis advisor, Professor Bill Adams, who is part of what is called the Political Ecology research group at Cambridge. I had never heard of Political Ecology as a discipline until my studies in Conservation and Resource Studies. When I started reading more about it, I realized it was exactly all of the topics that had been interesting me for a long time, and I just never knew that there was actually a discipline. I saw that there is a pretty strong network of political ecologists at Cambridge who are a part of that political ecology group and then in the UK and Europe more generally. There’s also a whole network of political ecologists called POLLEN and many of those researchers are all based in Europe, so finding the discipline and realizing that this was something I was really excited about drove me to wanting to work with Prof. Adams and to be in the UK.

Nathaniel saw the Marshall Scholarship as a way to fund his education at Cambridge, but first he had to face a very rigorous application and selection process. “It was very stressful, but also made exponentially easier by all of the help from the OURS Prestigious Scholarships office. I never expected to get so much support through every stage of the process, from applying to the university first, and then all of the help in crafting the essays, to then going through a mock interview.”

After he completes his studies in the U.K., Nathaniel plans to pursue a Ph.D. in the area of political ecology and environmental politics. “I think that it is really important to have a practical sense of what is going on in the environmental field and what it’s really like to work in making environmental change, beyond just studying it and writing papers. So I’ve also been thinking about working potentially with an environmental non-profit for some time to get a better sense of the practical side of things, but then going back and doing research in the university setting or another setting to try to make that change happen.”

Nathaniel’s receipt of the Marshall Scholarship is the culmination of a long record of achievement. His translation of the poetry of Liu Zonyuan’s poetry is pending publication; he has also published several magazine articles and is the recipient of the Roselyn Eisner Prize in Poetry, the Ina Coolbrith Memorial Prize in Poetry, the Emily Chamberlain Cook Prize in Poetry, and the Masons of California scholarship.