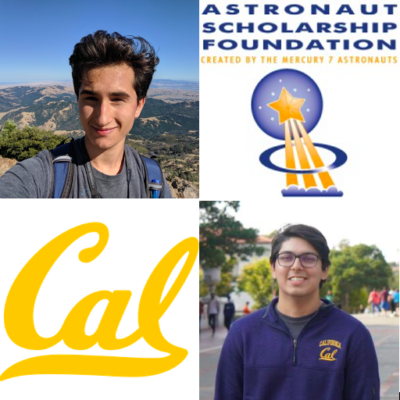 Two Berkeley undergraduates – Nitish Dashora (EECS, ’24) and Arun Johnson (CBE, ’23) – have received the prestigious Astronaut Scholarship Foundation (ASF) award for STEM majors who have demonstrated exemplary academic performance and have completed substantial work in their chosen fields outside of the classroom. The honor comes with $15,000, an accomplished mentor, and membership in the ASF network, which includes alumni, astronauts, and leaders in academic, technical research, and corporate leadership.

Sophomore Nitish Dashora, from Columbus, Ohio, is interested in machine learning algorithms for general intelligence, namely those concerned with robotics. Since his first week at Cal, he has been researching AI algorithms for high-speed off-road, self-driving vehicles at Berkeley AI Research (BAIR). He has also been working with the Redwood Center for Theoretical Neuroscience to explore semantically meaningful learning representations in computer vision. He recently worked at NASA Jet Propulsion Laboratory with autonomous racing and published as a first author in the International Conference on Robotics and Automation (ICRA). He aims to pursue a PhD in robot learning and hopes to connect neuroscience, machine learning, and decision-making through the medium of robotics.

Nitish is particularly looking forward to working with an ASF mentor – a scholar alum, C-Suite exec, or astronaut – to get advice on how to bring together his interests in entrepreneurship and research. In the meantime, he has a full-time summer internship in software engineering for Amazon Web Services just to keep another career option open.

Arun Johnson, from Redwood City, CA, has long been interested in sustainable chemistry. He began researching carbon capture, fusion energy, and nanomaterials for cleaning car exhaust in high school, winning an Emergent Ventures grant and the Pioneer Tournament. As an undergraduate, he has been performing research on the use of nanomaterials for selective water purification in Prof. Jeffrey Long’s group. He is also the Vice President of the Biofuels Technology Club, which converts waste cooking oil from the dining halls into diesel fuel. Arun plans to pursue a PhD in chemical engineering and continue his research in the use of nanomaterials for tackling climate change.

With a chemist and physicist as parents, it is perhaps not surprising that Arun was aware of big scientific issues, like climate change, from an early age. He was experimenting with carbon capture techniques in middle school and joined Prof. Matteo Cargnello’s lab at Stanford while still in high school. He has been committed to solving the challenges of carbon capture and water purifications – both key factors in fighting climate change – ever since. This summer, Arun is interning at Terraform Industries, a carbon capture startup investigating the use of solar enegy to capture CO2 from air and combining it with “green hydrogen” to create net-zero natural gas.

Both Nitish and Arun feel that applying for highly competitive programs like the Astronaut Scholarship is worthwhile, regardless of the outcome, as the process gave them the opportunity to reflect on their interests and accomplishments and tell their own story. Having applied for multiple scholarships, they both emphasize that it does get easier each time.

For more information on the Astronaut Scholarship, please visit the ASF website and
https://scholarships.berkeley.edu/astronaut-scholars/.