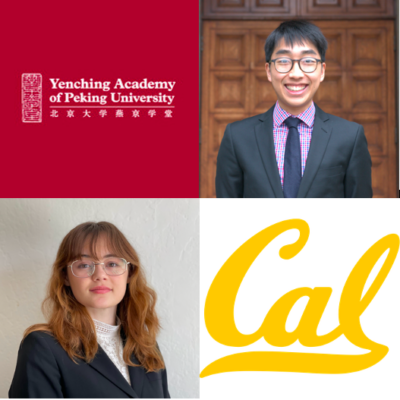 Only a few months after graduating from Cal, Ian Wong (Sociology and Economics, ’22) and Alexandra Feldman (Political Economy, ’22) will be heading to Peking University to start an M.A. program in China Studies as fully funded Yenching Academy Scholars. They will join an interdisciplinary cohort of 120 other students from around the world who are interested in thinking about China – past, present, and future – from both Chinese and international perspectives.

Ian is a Boston native who grew up in Hong Kong. As an undergraduate, he served as Editor-in-Chief of the Journal of Sino-American Affairs, leading a team of nineteen editors from North America, Europe, and Asia. While at Berkeley, Ian conducted research on superpower technological competition and wrote his honors thesis on social movements and identity formation. He also did URAP and SURF projects that have provided a strong basis for his upcoming graduate work in China. Ian has also interned at global consulting firm Albright Stonebridge Group’s China Practice, and at the American Chamber of Commerce in Hong Kong.

At Yenching Academy, Ian, who is professionally proficient in Chinese, intends to analyze regional cooperation and feedback mechanisms in the Guangdong-Hong Kong-Macau Greater Bay Area, providing a timely analysis on an exciting region in the making. He is looking forward to making connections and finding resources that would be impossible to access without being part of the Yenching community.

Alexandra, a native of Southern California, first visited Beijing during a four-week Chinese language immersion program after her sophomore year in high school and has continued studying both Chinese and Chinese literature at Cal, while majoring in Political Economy. Alexandra, a Regents’ Scholar, participated in several URAP projects on topics varying from cognition and climate change to American exceptionalism.

At Berkeley, Alexandra became the Head News Editor for the Daily Californian and began writing poetry and short stories. As a Literature and Culture student at the Yenching Academy, she plans to explore the differences between the Chinese fantasy genre and Western fantasies, looking specifically at the sociopolitical dimension of fantasy. Her eventual goal is to become a writer and scholar engaged with both China and the U.S.

Ian and Alexandra both have advice to students thinking of applying to Yenching Academy or other competitive scholarship programs. Ian highlights the importance of finding a niche you’re passionate about to create a narrative around, and Alexandra emphasizes the importance of talking with professors in office hours all along the way for advice and to brainstorm about the future.

For more information about this opportunity, visit the Yenching Academy website and https://scholarships.berkeley.edu/yenching-scholars/.