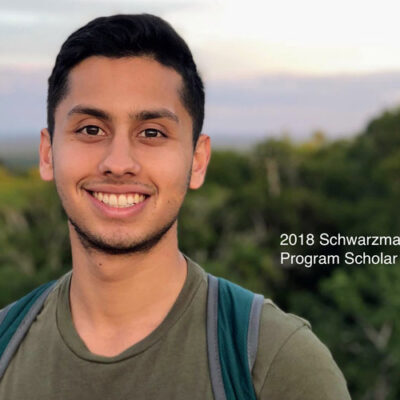 Tanay Jaeel graduated from Berkeley, where he majored in Business Administration. During his time there, he went deep into social impact initiatives through his coursework and extracurriculars, including projects for the California State Government, rural districts in South India, and various nonprofits. After graduation, Tanay worked in Product Strategy at LinkedIn, building out the platforms job-seeking experience to help millions of members find their next career opportunity. His interest in Asia and China sparked during a 6-month rotation with LinkedIn in Singapore where he focused on driving consumer, product, and monetization growth in the region. Tanay is joining the Schwarzman Scholars program to study how the tech industry and public sector can partner to create and scale technology for social good. Tanay is 23 years old and from the United States.

142 Schwarzman Scholars were selected from over 4,000 applicants. The Class of 2019 is comprised of students from 39 countries and 97 universities with 41% from the United States, 20% from China, and 39% from the rest of the world. The Class of 2019 will enroll at Schwarzman College on the Tsinghua University campus in Beijing in August 2018.

This class represents the growth of the Schwarzman Scholars network. It has been incredible to see the program expand to 13 new countries and 51 new universities included in the Class of 2019. “Meeting these people from all over the world, who at such a young age have already started to make an impact in their respective fields, has been truly inspiring,” said founder Stephen A. Schwarzman.

The 142 Scholars were selected through a rigorous application process designed to evaluate proven intellectual and academic ability, as well as leadership potential and strength of character. The selection process relies on readers from different regions and backgrounds who can provide insights to identify the highest level of leadership and academic excellence. More than 400 semi-finalists were invited to an in-person regional interview in Beijing, Singapore, London or New York, and went before panels of distinguished figures comprised of CEOs, former heads of state, university presidents, non-profit executives, journalists and other leaders from around the world.

Our next class brings together another group of young leaders who have the demonstrated ability to bridge differences in background, professions, and perspectives through their leadership on campus and in the workplace. “They will be a dynamic part of the Tsinghua community and through their very different career paths will help ensure peaceful and prosperous relationships between China and the rest of the world,” said Global Director of Admissions, Robert Garris.

Schwarzman Scholars counts among the Class of 2019 an exemplary group of individuals, including a student orphaned by ethnic genocide in Rwanda who worked his way toward a scholarship at Harvard University; a graduate of Stanford University who worked as Deputy Chief of Staff to McKinsey’s Global Managing Partner, Dominic Barton; a member of the Israel Defense Forces Intelligence Corps who attended Columbia University; a student at the University of Sheffield who has served as a Lieutenant in the Singapore Armed Forces; a member of the Princeton University Varsity Crew team; a student who graduated from IIT Bombay and built an engineering career in Japan, leading projects across Asia; and, a graduate of the University of Melbourne who created a non-profit to promote social inclusion through sports and recreation.

All Scholars will study and reside at Schwarzman College, named byArchitectural Digest as one of the 9 Best New University Buildings Around the World. The LEED GOLD state-of-the-art building at Tsinghua University, was designed to encourage cross-cultural connections and intellectual exchange.

The program’s academic curriculum was crafted by some of the most talented academic leaders from prestigious global universities including Harvard, Yale, Princeton, Stanford, Oxford, and Tsinghua. In addition to a core curriculum, Scholars will focus on one of three academic disciplines: public policy, economics and business, or international studies. The program has recruited a group of leading professors from Tsinghua University as well as visiting faculty members from leading institutions around the world.

All of our Scholars have outstanding achievements and aspirations. “At Schwarzman College at Tsinghua University, they will begin a new chapter of their lives and be given the opportunity to explore China on the global stage,” said Youqiang Wang, Dean of Schwarzman Scholars.

Beyond the classroom, Scholars will gain unrivaled exposure to China and a broader network of important relationships through prestigious internships, mentorship opportunities, distinguished speakers and extensive travel throughout China aligned with their academic concentrations and professional interests. Scholars will be provided with career services support, giving them access to the best career opportunities and global network both while in Beijing and after they graduate. This combination of coursework and real-life experience will provide students with the first-hand, in-depth understanding of China critically important to lead in the 21st century.

About Schwarzman Scholars:
Schwarzman Scholars was inspired by the Rhodes Scholarship, which was founded in 1902 to promote international understanding and peace, and is designed to meet the challenges of the 21st century and beyond. Blackstone Co-Founder Stephen A. Schwarzman personally contributed over $100 million to the program and is leading a fundraising campaign to raise an additional $500 million from others to endow the program in perpetuity. Schwarzman Scholars has already raised $516 million towards this $600 million goal. The endowment will support up to 200 Scholars annually from the U.S., China, and around the world for a one-year Master’s Degree program at Tsinghua University in Beijing. Scholars chosen for this highly selective program have demonstrated exemplary leadership qualities and their potential to bridge and understand cultural and political differences. They will live in Beijing for a year of study and cultural immersion, attending lectures, traveling, and developing a better understanding of China. Learn more at www.schwarzmanscholars.org, like us on Facebook atwww.facebook.com/SchwarzmanScholars and follow us on Twitter at @SchwarzmanOrg.