Varsha Sarveshwar (’20) majored in Political Science, with minors in Public Policy and History. Since graduation, she has worked as a Public Service Fellow and then as Executive Assistant for Cabinet Affairs in the office of California Governor Gavin Newsom. While at Berkeley, she was president of the ASUC and the Cal Berkeley Democrats. Varsha is deeply interested in educational policy as it relates to equity and access. At Oxford, she plans to do the MSc in Comparative Social Policy and the Masters in Public Policy. 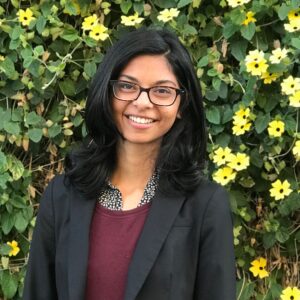 Namrata is a senior at the University of California, Berkeley, pursuing a Physics (Honors) degree. Her senior thesis, supervised by Professor Naomi Ginsberg, involves understanding the dynamics of self assembly of gold nanocrystal superlattices using optical and x-ray scattering techniques. She has also worked on studying the trajectories of electrons in manganese doped halide perovskites using Monte Carlo simulations. At Oxford, she hopes to continue investigating the origins of intriguing phenomena in promising photovoltaic materials by being at the interface of experimental and computational physics. Namrata is also very passionate […]

Zarko Perovic grew up in Serbia and graduated from UC Berkeley, among the top five students in his class. His primary passion, which he developed in his childhood, is preventing war crimes. At the UC Berkeley War Crimes Studies Center, Zarko helped create the Virtual Tribunala project that synthesized the court proceedings of the Cambodia Tribunal for the benefit of victims of the Cambodian Genocide. After graduating, he worked at the Office of Global Criminal Justice at the U.S. State Department as a John Gardner Fellow, where he helped with […]